IMAX Corporation and Lionsgate recently announced I, Frankenstein will hit IMAX theaters this upcoming January 24, 2013. Aaron Eckhart stars as the Frankenstein creature named Adam. If IMAX thinks the horror movie is action-packed, who am I to argue. I just want to watch I, Frankenstein even more.

“I, Frankenstein is the kind of action thriller IMAX fans seek out,” said Greg Foster, CEO of IMAX Entertainment and Senior Executive Vice President, IMAX Corp. “The producers certainly have a strong track record – with the Underworld franchise having grossed more than $460 million at the global box office – and we’re excited to team up with them once again as they launch this all new cinematic world.”

Synopsis: 200 years after his shocking creation, Dr. Frankenstein’s creature, Adam (Eckhart), still walks the earth. But when he finds himself in the middle of a war over the fate of humanity, Adam discovers he holds the key that could destroy humankind. The action thriller I, Frankenstein is written for the screen and directed by Stuart Beattie from a screen story by Grevioux and Beattie. The film is brought to life by a cast that includes Eckhart, Bill Nighy, Yvonne Strahovski, Miranda Otto, Socratis Otto, Jai Courtney, Kevin Grevioux, Mahesh Jadu, Caitlin Stasey and Aden Young as Victor Frankenstein. 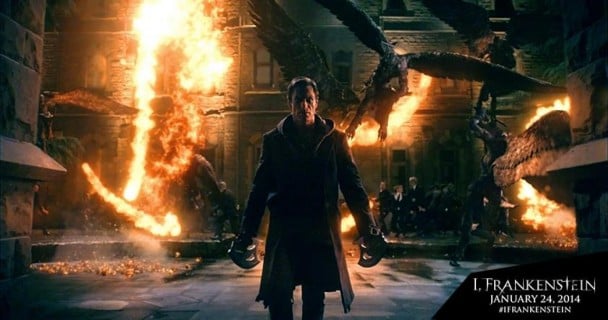 Synopsis: Dr Victor Frankenstein dies frozen to death and the creature buries him at the cemetery of his family. However he is attacked by demons but he kills one of them and Gargoyles save him and take him to a Cathedral where the Gargoyles Order gathers. The Queen of the Gargoyles Leonore keeps Dr. Frankenstein's journal together with the treasures of the Order and gives the name of Adam to the creature. Then she explains to Adam that there is an ancient war between the Gargoyles that are angels and demons under the command of the Prince Naberius. She also invites Adam to join the Gargoyles in the war against demons, but Adam prefers to isolate in a remote place. Two hundred years later, Adam returns and finds a modern society. Soon he learns that Naberius has the intention of creating an army of soulless corpses to be possessed by demons. The scientist Terra is researching a process to create life and Naberius is seeking Dr Frankenstein's journal to help Terra and raise his army.

Tagline: In the battle between good and evil, an immortal holds the key.